Home/Uncategorised/Parasites of the economy
­
Previous Next 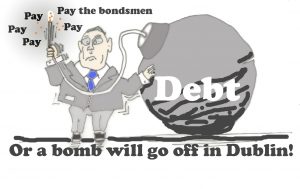 Europe and its central bank are structured to block the creation of money supply to any government other than for supporting banks and bondholders. A monetary and fiscal straitjacket has been built that obliges the Euro-zone economies to rely on banking for credit and debt. Thus the masters of the financial sector are the economic planners, in charge of monetary and fiscal policy without being subject to any level of democracy. To maintain their position, they breed a belief that they are an essential part of the economy, not external to it. This is precisely the strategy that parasites use in nature to persuade their hosts that they are not external invaders, but part of the host’s own body, deserving careful protection.

These privatised financial engineering corporations, with the law on their side effectively print money. They are enriched solely by interest and profit through the manipulation of money. When a country’s budget deficit deepens they simply issue more bonds to cover the debt. As the debt and interest payments grow too onerous and begin to slow the economy, the financial wizards engage in ‘quantitative easing’ an unconventional monetary policy in which a central bank purchases government securities or other securities from the market in order to lower interest rates and increase the money supply. However, very little of the money created gets to the real economy. It was estimated that £375 billion worth of QE in the UK, led to 1.5-2% growth in GDP. In other words, £23-28bn billion of extra spending in the real economy. It’s incredibly ineffective, because it relies on boosting the wealth of the already-wealthy and hoping that they increase their spending. In other words, the ‘trickle down’ theory of wealth.

As the state falls more under the spell of capital it dedicates itself to gathering taxes for loan repayment instead of investing it, or raising living standards. Prior to the building boom crash in Ireland, the more the finance institutions lent, the higher property prices rose, thus encouraging more lending. As mortgages and rents rose, so did the proportion of household income paid to the financial sector. The market value of property rose to far exceeded its real cost in labour and materials. Everyone was led to believe, that all they had to do was to get to own property by any means and inflation would make them rich. However, when the price of one property fell back, it avalanched, property fell below its labour and materials production value. The bubble had burst. Did the big lenders, the primary bondsmen, the wise financial advisor’s lose their money on their gambling malpractice? No, Jean-Claude Trichet senior bondsman himself and governor of the European Central Bank at the time, issued a direct threat ‘A bomb would go off in Dublin’ if they were not fully compensated for their losses. A screamed financial analogy perhaps, but it worked perfectly on our cowardly conservative politicians who trembled on their knees before the financial god’s threats of a penniless hell. So they did, as bid, cuts and austerity became the order of the day.

Just as mortgage lenders assess the potential maximum flow of money they may extract from a client and offer the highest amount of loan they believe the client can afford, likewise, international banks assess the earnings of countries to see how much debt service they can pay. They then organise to capture the entire economic surplus of that country and eventually, every country, into debt service payments.  They offer loans to gullible politicians who are then in a position to induce their electorate to return them to political power. If and when countries get into difficulty with interest payments, further creditors and the IMF  offer the indebted countries even more money at higher interest rates to pay the outstanding interest,  the debts spiral out of control.

Current economic theory is simply a mechanism for transferring wealth from the mass of people to the wealthy, it pushes countries to service the huge debts by lowering domestic wages to pay creditors. This is the policy being imposed on many countries today, it is the basis of the IMF’s structural adjustment or austerity programs for dealing with debtor countries, essentially a form of looting that transfers national resources to private lenders. It concerns itself mainly with wages and consumer prices, not with the inflation of property and stocks. It serves as a cover for the polarisation of the world economy between rich and poor the opposite of what might have been assumed with the promises of globalisation. The main form of exploitation is  shifting from wages to the financial system’s extraction of value into interest payments.

This dictatorship of capital demands loyalty from the political parties it supports and persuades that the needs of people will only be served by trickle-down economics. As capital further concentrates in the 21st century and it becomes more apparent that its wealth is not trickling down, protest and street action will intensify. To counter the protests of citizens, attacks on their constitutional rights and protections will occur under the guise of some terrorist threat, for fear, is the best instrument to subdue a people and concentrate power. To-day western economies have been financialised in a predatory way that sacrifices the public interest to that of the financial sector. Finance is no longer a positive productive part of the social economy it has become its parasite.