ON ANGELUS BELLS AND OTHER SYMBOLS

ON ANGELUS BELLS AND OTHER SYMBOLS

The angelus bells as tolled on RTE are to some people the ‘chimes’ are a treasured piece of Ireland’s national culture, to others like myself they are a manifestation of catholic triumphalism. As my female children grew and matured, the full meaning of the angelus became apparent. The iconic symbolism of a virgin conception laid down an impossible role for females and motherhood for real sexual conceptions were implied to be impure and therefore reduced. Symbolism such as the angelus and the vast amounts of virgin images and plaster models which infest schools debase female reality, providing a philosophical foothold for misogyny.
There exists a thin argument that the angelus is only a bell and not a prayer. However for over sixty years of my life, it was this bell that tolled from every Catholic Church steeple. It came to symbolise the ethos of that religion as during those dark years, it drowned out the cries of so many abused children. I cannot see the Angelus as a ‘treasured’ piece of Ireland’s national culture. We have to only look at Northern Ireland to see the power of symbols such as flags, bells and the lambeg drum.
It is easy to understand why other religions do not object to the angelus, they see it as a time for prayer and worship drenched in the symbolism of misogyny and division, practices which they too hold in common. The main division arises between the cultural practices of faith based beliefs and the growing number of people searching for a more robust human based morality and a society bereft of division and superstition. For such people periods of contemplation based on the human intellect would be delightful. Thus if we look, we can find shared ground for the one uniting feature of all parties and listeners, our common humanity, Christian, atheist, Muslim, agnostic and Jew. The emphasis on inclusiveness can be found in the last three verses of ‘my great poetic work’! I accept our society does need more time to “Go placidly amidst the noise”. Such contemplative space must be drenched in harmony and not carry within its heart the obvious division which the angelus does, it must not divide or aggravate the heart of those who listen. It must be the essence of inclusiveness. 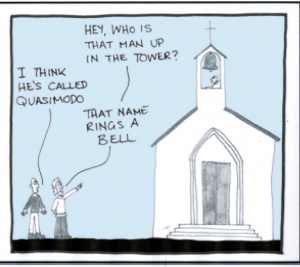 On stony ground, a young girl fell
How glad a virgin – men may boast
Submit to the sperm, of a holy ghost.

Her husband cried, its hideous fun
To see thy holy will being done.
By force of deep religious faith
Celestial royals, must replicate.

Ring out; ring out, the Angelus Bell
Drive all dissenters down to hell

BUT-BY the flame of reasons light,
The bell did change and set it right
An exultant peel of celebration
Ringing clear, throughout the nation.

Ring out; Ring out, Beethoven’s bell
Renaissance man arise from hell
Now and on, the joyful sound
As mankind’s knee lifts from the ground.