Home/Uncategorised/Neutrality under threat
­
Previous Next 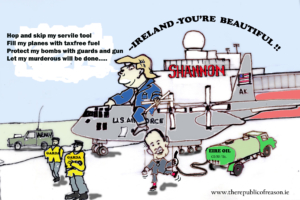 AT SHANNON AIRPORT, Leo Varadkar and Simon Coveney are dismantling our neutrality; they risk the future of our children and the dignity of our nation by aligning Ireland’s foreign policy with that of Trump’s Washington Wall Street war consensus which insists that US interests are exceptional and must be free to dominate every corner of the globe. Any country that attempts to extend democracy over capital or US interests will be destroyed, by media demonisation, internal meddling, sanctions and war. Thus, from plundering the resources of the world and the use of munitions and arms sales in endless wars, blood-soaked money pours back to the 1% of the world’s wealthiest.

THE ROLE OF GOVERNMENT

Our government ministers grovel to this power; they want to be a part of it and get a few crumbs from the table, an invitation to the White House, a smile, a pat on the head. While the ordinary passenger at Shannon Airport is harassed, their bags and person searched, the government insists that our Guards and Army turn their back on planeloads of troops and munitions.

The US military uses Shannon Airport on their way to and from wars all over the Middle East and Africa, Iraq, Syria, Afghanistan and now the Trump administration is ferrying military hardware to help Saudi Arabia in its dreadful slaughter in Yemen. A few days ago, on the 5th November, a US military Globemaster No. 9212, passed through on route from Tel Aviv to Washington, a flight that makes us complicit in the slaughter of the Palestinian people. Close to 3 million US troops and their weapons have passed through the airport since 2002, with over 60,000 transiting last year. It is also very likely some of the aircraft passing through Shannon Airport ferry kidnapped victims to CIA torture centres. But again, our authorities refuse to look; they do not want to know. It would generally be the function of an honest and independent media to keep people informed about the situation in Shannon; itis unfortunately outside their comfort zone to do so.

Shannonwatch holds peace vigils at Shannon Airport on the second Sunday of every month from 2 to 3 pm, please come and join this ongoing campaign to end the US military use of Shannon Airport. Contact your local representative and insist that Ireland regain its neutrality. From a strong neutral position, Ireland could and should be a robust voice for peace on the international stage.

NOTE; This article and cartoon are free to copy, please forward on or republish; please contact with any comments positive or negative.