Chaos in the Health Service

Home/Uncategorised/Chaos in the Health Service
­
Previous Next

Chaos in the Health Service 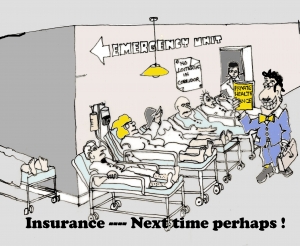 Health care of the country’s citizens is the responsibility of the collective community supported by a duty of self-care that applies to all responsible citizens. In Ireland it would be rational that the health service be a single national organisation funded through progressive taxation. Some who see health as a platform for selling a service for profit, contend that it is more efficient, privatised. However, they recognise that difficulties arise in attempting to make profit from a section of the population that is without surplus and agree to let them be cared for by the public sector, so at present, we have both. While overall the health of the nation and the longevity of its people has improved, we can do much better. One of the main criteria for judging society is how it cares for the health of its citizens.

At present the mechanism driving our economy is competition and greed, this ensures that those possessed of the most competition and greed, a toxic combination, will rise to the top of many organisations. I do not contend that all executives of the HSE are driven by such motivation, but these imperatives, can and do pervade all aspects of society causing contradictions in motivation, a situation that flourishes within a two tier health system. When a private section of the health service is structured to serve the wealthy it attracts better funding which in turn attracts the best health care workers and resources away from the public system. For those on the borderline of affording health insurance, the media highlights hundreds of unattended people lying on trolleys in the public sector, but during commercial breaks… soft and friendly voices urge people to drop in and be cared for in their various extensive, well equipped emergency private clinics.

Overcrowding, trolleys and chaos in public hospitals is excellent for selling insurance and making profit. It is not surprising that tragic stories have emerged from this cocktail of overcrowding, long waiting lists and exhausted staff. The public health system is without an ideological focus, what should be a pervading feel-good factor amongst the staff for their public service is undermined by negativity. Firstly the cultural connotation of ‘loser’s’ that is given to any beneficiary of the state, be it social welfare or health and secondly the constant publicity given to its failures. The entire scenario contributes to the objective interests of capital.

The NHS in the UK had its roots in the aftermath of two World Wars. Millions of men were arriving back from the front, organised and proficient in the use of arms. Socialist ideas and dreams were rampant throughout Europe as was the perception that a socialist society was emerging in the USSR. It was a dangerous time for capital. These men and their families had to be placated by the state, and persuaded away from any thoughts of socialism. That consideration ensured a transfer of health care, education and housing to the people on a massive scale. However, with the fall of the Soviet Union and the subsequent collapse of socialist ideals, trade unions and the confidence of the working people, any threat to economy or political power from the bottom faded. Confidence returned to the ideologies of free market and capital, wealth began to transfer upwards, privatisation grew, wages and job security fell. All things social were denigrated by the establishment media, society became something that was seen as whose sole role was to serve the economy. This poverty of philosophy pervaded the public health service.

The public health service is funded by taxation and such a collective resource of the people is seen as fair game for the vultures of profit. The soaring costs of technology and specialist medicines are part of the problem. Susan Mitchell of the Sunday Business Post 27.12.15, in an interview with HSE executives revealed that the drug Soliris was being supplied at about €400,000 per patient per year, and that the HSE had spent €483 million on high tech drugs last year even though that represented only 1% of the items dispensed. Another huge drain on resources highlighted was the amount spent supporting private nursing homes. The legal profession maintains a corrosive presence around the fringes of the health service waiting for the inevitable mistake, it sucks money which should be spent on care into crippling legal fees, €69 million in 2014. Litigation introduces a culture of fear which in turn clogs the service with a huge amount of unnecessary work as doctors, forced to practice medicine defensibly, refer patients on to multiple tests and specialists. There can be no doubt that any plan to introduce a no-fault compensation scheme would be vigorously opposed by the legal profession.

An immediate and simple step to ensure parity of interest between those who run and are cared for within the health system would be to prohibit all responsible for public health care, the Minister for Health, all within the Department of Health, hospital management, consultants and staff, from holding private health insurance.

To make real progress health care needs the following;
• Expansion and large scale investment.
• A no fault compensation scheme.
• Long-term planning
• The integration of all existing private care systems under one national body to establish a single-tier egalitarian system.
• A seamless integration between agencies promoting prevention and care.
• A dispersed home care and hospice system.
• The resources to meet the health care needs of all our people and full transparency on how they are being dispersed.
• But more than anything else it needs the national philosophical commitment to enhance the most important requirement in any health service, morale.