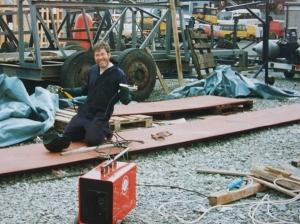 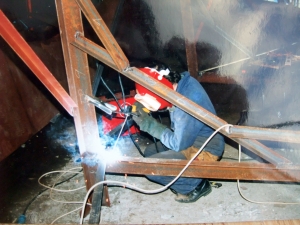 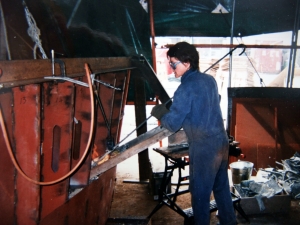 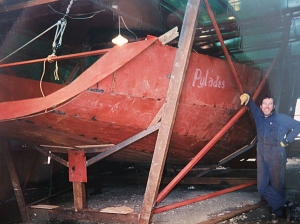 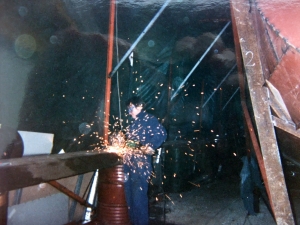 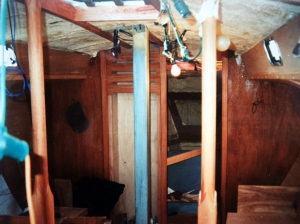 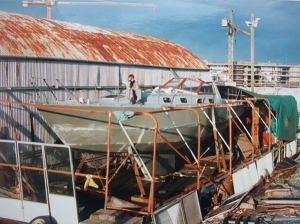 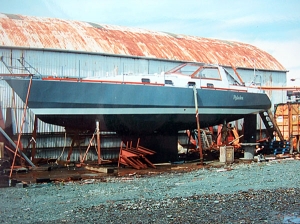 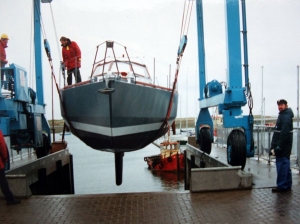 Pylades – The ultimate mobile sculpture
after 3 years in a shed

While sailing to France in 1994 with just the two of us on board the Sabre 27 we realised that the project ran efficiently and we were able to manage the watch keeping and the boat. Over the following winter and many glasses of wine a larger boat was discussed and a debate ensued whether to build or buy.

We decided to build from scratch and bought a set of drawings from Van De Stadt, the well-respected marine architects, the drawings were comprehensive and very detailed, indeed a bit frightening.

A site was rented to build the boat in the ESB yard at the East Wall Road ‘the pole field’, a shed was  promised but never materialised, but they allowed us access to their extensive storage areas where we got steel and tarpaulins and in three months we built our own shed, not pretty, but it kept out the worst of the weather.  The 4mm and 3mm steel plate was cut using a ‘Duplex’ nibbler. For nine months we cut patterns and had nothing to show except lots of odd steel shapes some 12M long.

Four jig frames were formed into which the cut plates were pulled by car and the hull began to take shape. Welding was by a combination of stick arc and MIG, other than that there was a lot of grinding and welding. Katherine’s birthday present that year was a large bench press drill.

The roof of the shed was removed, the jigs were cut away. Over the course of a week, we lifted the hull inch by inch until the keel, skeg and rudder could be fitted and secured. The shed was dismantled, the tools put away, the focus of the project was to completely change direction…….the sea was calling

After 6000 hours of working part time. Generally, Fergus worked all Friday, and Kay and Fergus Saturday and Sunday.  All holidays were spent on site  except one week per year and a few days over the mid-winter festival. In May 1997, with great help from the ESB and its staff,Pylades was transported by a massive low loader and Garda escort to Malahide and in a heart-stopping moment it was launched. It floated perfectly to its lines